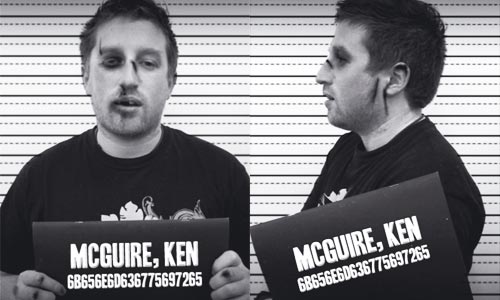 If you believe the above photo, I’ve been beaten up for my love of the arts. Or more for the honour of performing with the DTC actors again in our production of Accidental Death Of An Anarchist which opens next Wednesday night in the new Set Theatre on John Street, Kilkenny.

We’re (as in The Devious Theatre Company) taking our next production to the new 252-seater space for a five night run commencing Wednesday December 2nd and wrapping Sunday December 6th.

Written in 1970, Accidental Death Of An Anarchist was inspired by events that took place in Italy in 1969 when an anarchist, Giuseppe Pinelli fell â€“ or was thrown â€“ from the fourth floor window of a Milan police station. He had been accused of a campaign of bombing, of which he was later found innocent. The resultant scandal uncovered a system rife with corruption and intensified public rage at the government. Intensification of public rage is something that Dario Fo is a master of with his work challenging church, government and the authorities in Italy for over 50 years.

Accidental Death Of An Anarchist takes place as an enquiry into the anarchistâ€™s death is causing the policemen involved to have some difficulties remembering the details of the event. That is, until a nameless deranged madman shows up and proceeds to tie the authorities around his fingers in a master class performance of utter logic. The cast includes Alan Butler, Sean Hackett, Simone Kelly, myself, John Morton and David Thompson playing the famed role of the shape shifting Madman. Having previously donned the director’s hat for Trainspotting (2008), John finds himself wearing it again for this production (and also the followup with Fo’s Can’t Pay? Won’t Pay! next spring)

As is usually the case with adaptations of Dario Fo, this production will look at the events of the play through the prism of modern Ireland and the corruption and scandals inherent in our own political systems. Employing the comedic methods of commedia dellâ€™arte and slapstick as used by Dario Fo, Accidental Death Of An Anarchist is an uproariously funny farce which rallies against political injustice and corruption.

To mark the occasion of the opening of the new show I’ve got two tickets sitting here on my desk that I would like someone to have. They’re for the opening night of the show on Wednesday coming and if you would like a chance at winning the tickets, leave a comment and tell me which Italian playwright penned Accidental Death Of An Anarchist. We’ll leave things run until tomorrow evening perhaps, say 5pm tomorrow (Friday) to try get a winner.

The show itself runs nightly at 8pm, doors open 7:30pm, we’ve priced tickets at â‚¬12 for some very affordable theatre and they can also be bought from Langtons on John Street, Rollercoaster Records on Kieran Street (Kilkenny) and online via DeviousTheatre.com.